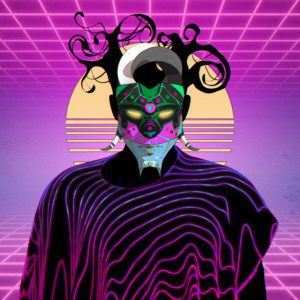 The character is from a fictional universe where humans share the Earth with a race of mysterious, shape-shifting mimic entities called Omnimorphs.

They live their lives on the brink of human societies, not getting involved, but close enough to observe. Though they’re inherently devoid of any shape or form, here on Earth, they usually choose to appear as humans.

While they’re completely peaceful, their sheer existence is like an eerie reflection of humanity, a constant awkward, inquisitive stare that makes one squirm with discomfort.

What is the projects launch date?

We’ll have a presale from September 13-16, and the public sale will be on the 16th, evening hours, CET.

How did you come up with the idea for this project?

We started to play around with the idea of creating our own collectibles at the end of March. Back then we had a totally different concept in mind and it took several weeks of discussions to get to its current state. Originally we wanted more cute, playful characters as at that time that was clearly the zeitgeist of the NFT art collectible space. However, after a few iterations, we ditched the cuteness completely, in favor of a much darker style, which frankly resonated much better with all of us.

A previous artwork Dániel made sparked the idea of creating mysterious, masked characters. In the beginning, the masks were meant to represent emotions and we wanted to mix them up to create strange looks, but eventually, that high concept dissolved into a more homogenous aesthetic, this eerie character visually dominated by highly detailed, ornamental elements.

We believe that the detail-orientedness and general artistic quality of the Omnimorphs artworks set us apart from most other similar projects. We also use a vast amount of different colors, shapes, and textures, resulting in extremely rich visuals overall. We also put more emphasis on backgrounds, creating more of an immersive piece of digital art than simply a profile picture. We already had some people asking if there’ll be prints available of Omnimorphs, which is a sign that we pretty much succeeded on this front.

We also put great emphasis on the lore that surrounds the characters. While at this point not a lot is known about Omnimorphs, our future plans include exploring and extending this fictional universe further, with new artworks and narratives.

Also, while hype, FUD, and FOMO reign supreme in the NFT universe, and we too love the traction that our project is getting, growing our project organically was the most important thing for us from the start. We are chill people and we’re trying to do this whole thing in a chill way. Even though we are up to 10K Discord members, there are still meaningful conversations going on, we do scavenger hunts, regular meditation sessions, and we’re getting a lot of great feedback from our community (who we absolutely love). It seems like our server is a genuinely pleasant place to be for people, which is really the most anyone could ask for.

The team consists of 3 friends who are from Budapest:

The roles in the brackets are just a small part of the several other tasks we have in the project.

The price for each Omnimorph will be 0.08 ETH and there will be 10.000 tokens available. Because of our mechanics, the supply will most likely decrease depending on how many people choose this option.

We put a lot of time and effort into creating these highly detailed artworks. Also, we have long-term plans for the project, some plans are pretty much fixed, others are in the works. What’s sure is that people who buy in now will be buying into a project with a vision for the future.

Yes, we have already announced OmniFusion, which is one of the most important elements of our roadmap.

By burning an Omnimorph token, the holder becomes eligible for fusing its traits into another Omnimorph they hold. During fusing, the holder can manually select which traits of the burned token to transfer onto the existing one. Holders also get an Omnimorph Soul Shard after each burned token. This will be a claimable NFT that will enable access to further perks in the future.

All the details of the implementation are not finalized yet, but we plan to introduce it together with a smart system of incentives and deterrents, to make burning a hard,

but potentially satisfying choice to make for holders.