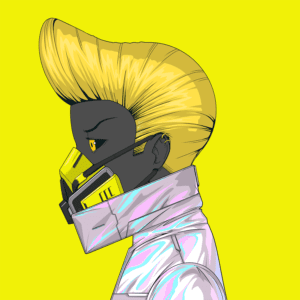 Life in the ethereal enclave was peaceful and prosperous. Rule under the emperor granted eternal life; infinite leisure for music, arts and poetry. For many this was bliss, but when the emperor suddenly died without an heir, everything collapsed. What was once everlasting, has now been condensed to a mere 7,777 hours. Now, gathering means for survival as a society crumbles, the 0N1 face their greatest enemies: Themselves.

What is 0N1FORCE launch date?

Our Project launches August 19th! We don’t want to rush the process. We are making sure to cross out T’s and dot our I’s prior to the official release so that everything runs smoothly!

How did you come up with the idea for 0N1FORCE ?

The idea for the project originally stemmed from project manager, JR’s love of Jamie Hewletts work on the “Gorillaz” project. The grungy, post-apocalyptic vibe Hewletts characters gave off was exactly what JR thought the NFT space needed. Our powerhouse team of 5 then came together to brainstorm ideas on an intriguing storyline that could grow and develop overtime with the community in mind. Once we had our storyline solidified with the majority of contributions by “Strawberry” and Em Bergie, we passed our storyline over to artist Bryan Lie (IMCMPLX). In a manner of hours our first 0N1 characters were born! We knew right then and there that we were onto something truly special!

There are numerous characteristics that make the 0N1Force project unique and stand out amongst all the other generative projects! The first thing that comes to mind is in direct relation to the meticulously handcrafted artwork. Our 0N1’s are presented in a profile view which adds a different dynamic to the normalized 3 quarter view artwork you see in the NFT profile pic space. Amongst almost 200 different attributes, we’ve also included specific traits for individuals living with disabilities so they may relate to our 0N1 characters on a more personal level. Lastly, in terms of our the artwork, our 0N1’s characters were also carefully created to sport an androgynous look and feel so that all traits may be interchanged and relatable to anyone and everyone who mints one! On the backend, our Discord channel is unlike any other! Creating the Discord foundation for incoming users was imperative and when members began flooding in due to attractive clean pop art and anime style of 0N1 Force, lots of fans began asking for different channels to express their anime/weeb interests. Once we tailored the Discord to hold Pokeworld, a Weeb-Radio, and Anime Movie Night, members really started to get engaged and stay engaged. Fictional 0N1 characters filed in and began interacting with members as pseudo-characters, the lore really began to unfold. We now have 3 current active pseudo characters at play, M33kasa, D34th, and M0R1A. Members can now assume their characters and begin documenting their stories in our RPG channel known as 0N1-Daily Living.

Our team is made up of 5 like-minded, driven individuals ready to take over the NFT world!

We believe our price point is not only fair, but generous! Taking into account how much fine detail and time went into creating our 0N1s, .07777 is an absolute steal! We’ve also put together such an outstanding team, all of which are in high demand, to build out an incredible community and project!

There will be a total of 7,700 0N1’s available on the market, being that 77 have been allocated for promotional purposes. We choose this number to stay aligned with our 0N1 storyline which sees the 0N1s facing a timer of 7,777 hours left to live! Can they be saved? Will they be saved? We’ll have to see what happens when the timer runs out!