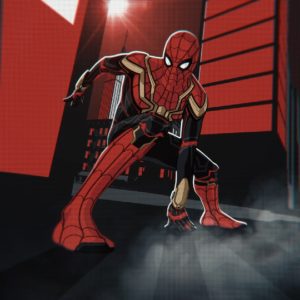 TO AMC MEMBERS WITH ADVANCE TICKET PURCHASE OF SPIDER-MAN: NO WAY HOME

Sony Pictures and AMC Theatres announced today that, in anticipation of the upcoming release for Sony Pictures’ Spider-Man: No Way Home, members of AMC Theatres’ Stubs Premiere & A-List, and AMC Investor Connect, will receive an exclusive Spider-Man™ NFT, via the WAX blockchain, with an opening day advance ticket purchase or reservation.

Designed by Award-winning Cub Studios, Over 100 NFT Designs Will Be Available Via the WAX Blockchain

Los Angeles, CA, November 28, 2021: Sony Pictures and AMC Theatres announced today that, in anticipation of the upcoming release for Sony Pictures’ Spider-Man: No Way Home, members of AMC Theatres’ (NYSE:AMC) Stubs Premiere & A-List, and AMC Investor Connect, will receive an exclusive Spider-Man™ NFT, via the WAX blockchain, with an opening day advance ticket purchase or reservation, while supplies last. There will be 86,000 NFTs available for this unprecedented Sony Pictures and AMC celebration of the release of Spider-Man: No Way Home.

Tickets go on sale November 29th for Spider-Man: No Way Home, which opens exclusively in theaters on December 16.

This special Spider-Man: No Way Home joint effort of Sony Pictures and AMC Entertainment marks the first ever NFT promotion between a studio and a major theatrical exhibitor. Over 100 NFT designs will be available, specially designed by powerhouse animation studio, Cub Studios, who have yielded BAFTA and Lovie awards for their work.

With tickets expected to go quickly, the NFT giveaway will be valid only for tickets purchased and used for December 16 showtimes in any format at AMC theatres in the United States, while supplies last. To qualify to receive the NFT, tickets must be purchased by members of AMC Stubs A-List, Premiere or Investor Connect on AMCTheatres.com or on the AMC mobile app. Those members must have their AMC Stubs account number associated with the transaction, and the movie ticket must be scanned at the theatre when the guest arrives for the movie. If the ticket purchase is refunded or the ticket goes unused or is not scanned , the NFT code will not be delivered.

The Spider-Man NFT will be available to be redeemed at a dedicated site operated by WAX, an energy efficient, ultra-low carbon footprint blockchain and the first certified carbon neutral. WAX is the most utilized blockchain in the world processing 15 million transactions daily.

The official Spider-Man: No Way Home teaser trailer, released in August 2021, broke the 24-hour all-time record for most global views with 355.5 million trailer views, eclipsing the previous record holder, Avengers: Endgame, which drove 289 million views. A new trailer for the film was released in November 2021 and can be watched here.

About Spider-Man: No Way Home

For the first time in the cinematic history of Spider-Man, our friendly neighborhood hero’s identity is revealed, bringing his Super Hero responsibilities into conflict with his normal life and putting those he cares about most at risk. When he enlists Doctor Strange’s help to restore his secret, the spell tears a hole in their world, releasing the most powerful villains who’ve ever fought a Spider-Man in any universe. Now, Peter will have to overcome his greatest challenge yet, which will not only forever alter his own future but the future of the Multiverse.

About WAX – The King of NFTs

The Worldwide Asset eXchange™ (WAX), aka the King of NFTs, is the world’s #1 blockchain, as measured by number of users and transactions, according to Dappradar.com. WAX’s mission is to bring NFTs to the mass market in the safest, most secure, environmentally friendly, and easy-to-use marketplace in the world. WAX is also the leading entertainment NFT network — in 2018, WAX introduced vIRLs®, giving consumer product companies the ability to directly link NFTs to physical consumer products. Co-founded in 2017 by William E. Quigley and Jonathan Yantis, WAX has facilitated the trade of more than 100 million digital collectables including Mattel, Hasbro, Major League Baseball (via Topps MLB collectables), Funko Digital POP!, Capcom’s “Street Fighter,” World Series of Poker and world-renowned entertainers Deadmau5 and Weezer. WAX is also the leading play-to-earn games and entertainment NFT network in the metaverse and is home to many of the leading blockchain games including Alien Worlds, Splinterlands, Farmers World and Farming Tales. For more information, please visit https://wax.io and follow along on Twitter and Discord.