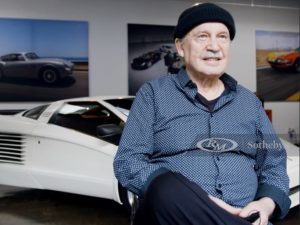 BLENHEIM, Ontario (19 January 2022) – RM Sotheby’s is thrilled to break new ground in the collector car market by offering a world-famous supercar alongside a unique NFT package, owned and created by Oscar-winning music legend and the “Father of Disco,” Giorgio Moroder. The single lot offering will cross the block at the Arizona Biltmore & Spa in Phoenix, on 27 January, during RM Sotheby’s 23rd annual Arizona sale.

And for all the unquestionable appeal that the V16T supercar holds for enthusiasts and collectors, the auction lot has now been expanded with the addition of an incredible NFT package, that will undoubtedly excite both car fans as well as music and digital art collectors keen to acquire a unique and unrepeatable offering from one of the world’s most legendary figures within the music industry. Moroder is an icon of the ‘80s; the era in which the car was created and the decade with which Giorgio Moroder is indelibly associated.

For the legendary music producer, film composer, and hitmaker, Giorgio Moroder, his approach to innovation mirrors that of his music and film career. Universally celebrated as “The Father of Disco,” he has written and produced hits for countless artists, working with stars ranging from Donna Summer, to David Bowie, and to Daft Punk, while also forging a career as a multiple Oscar and Golden Globe award-winning film composer, writing and producing music for films such as Midnight Express, Flashdance, and Top Gun. Moroder serves as a one-man nexus of art and technology, and this latest endeavor is emblematic of his status as a driving force in both realms.

Giorgio says: “The creation of the Cizeta-Moroder supercar comes from my quest to marry technology and creativity – starting with the synthesizer and electronic music in the early ‘70s. The emergence of NFTs and blockchain technology reminds me of that same energy and enthusiasm from those early days. This exciting project with RM Sotheby’s, Iconoclast, and Jeremy Ian Thomas ‘Soulajit’ combines all of my lifelong passions: original music, innovative technology, and high-performance automobiles. Coupling the sale of the car with a unique soundtrack and NFT was thus an exciting and completely natural decision!”

The auction, implemented through a partnership between RM Sotheby’s, Iconoclast, & in cooperation with NFT PRO™, a white-label NFT solution for enterprises, combines the sale of the groundbreaking Cizeta-Moroder V16T Prototype sports car with a package including: a four-track Giorgio Moroder music EP exclusive to the car, a 3-D artistic rendering of the car NFT as a collaboration with digital artist Jeremy Ian Thomas “Soulajit,” as well as a 3-D scan of the car along with scanned car provenance documentation & memorabilia.

Gord Duff, Global Head of Auctions, RM Sotheby’s, says: “For RM Sotheby’s, the opportunity to work with Giorgio on this project has been a privilege. Few individuals have maintained such an important place in popular culture and have enjoyed his level of success. That success has been driven by his constant innovation and through his desire to embrace new trends and technologies. The NFT offered with the car is exactly that – a new, exciting, and artistic project that is breaking new ground in the collector car auction world. And we are delighted to be able to offer it for public sale in Arizona.”

Olivier Chastan, CEO of Iconoclast, remarks: “Iconoclast is dedicated to perpetuating iconic artistic legacies into the future. We are excited and honored to partner with Giorgio, a visionary who was responsible for creating the ‘sound of the future,’ and who is now breaking yet another boundary with this exciting and unique partnership with RM Sotheby’s and Jeremy Ian Thomas.”

Robin is an established artist working with some of the worlds top creative talent.  He’s entered the NFT game with his first drop on Nifty Gateway.

Robin is an illustrative designer and animator based in Belgium. Combining both his immense passion for music and visuals, Robin started Rhymezlikedimez over 6 years ago, which quickly grew into a worldwide brand. Rhymez is best known for working with and providing visuals for international music icons like Anderson.Paak, Playboi Carti, Lil Uzi Vert, Dua Lipa and brands like Nike, Apple and Beats by Dre. He creates a magical universe where the powers of music and illustrations collide. Robin’s aesthetic is a blend of pop culture influences and his perception of the world around him, with a strong feeling of escapism to it. With the main focus on keeping the highest level of quality, he creates a powerful nostalgic aesthetic that resonates with people all over the world.