What is your Display Name?

Where are you from? (Provide a little bit of your background, have you moved etc)

I am originally from Detroit, Michigan. My family moved to the bay area just south of San Francisco when I was 4. I grew up there and then moved to Los Angeles when I was 18. I went back and forth a bit between San Francisco, New York and Los Angeles for a few years, but then finally settled in Los Angeles. I have now been here for about 20 years.

Can you tell us about your background and what lead you down the path to becoming an artist and ultimately experimenting with NFTs?

This is a long story, but here is a brief synopsis….

I began drawing at age 3 and started playing guitar at 5. Although I loved drawing, by about 10 years old, the idea of being a rock guitarist took precedent over my love for visual arts. I made my way to Los Angeles at 18 and played lead guitar in a few bands and had some moderate early success. I then also became really interested in music production which took me in a slightly different direction.

By 25, I had produced some major label albums, but unfortunately I also began going down a dark road with drugs and alcohol around the same time. For a few years, I really struggled and to say it was bad is an understatement. I eventually got sober a few years later and still am gratefully I still am sober to this day.

I wasn’t sure where life would lead me coming out of that, but I sort of then fell into doing music for high-end advertising which took off for me. I had a pretty good run with that for about 10 years and also was involved with several feature films. During that time I also began licensing my music for a lot of film and television. Things were going pretty good, but somewhere along the line I lost my connection to who I was as an artist. So much of what I was doing was for someone else, it was much more service based and what I truly wanted to do creatively.

Around 2017, as I was just starting to get my skill-set really together with Orchestral composing for feature films and trailers, I suddenly had a catastrophic hearing problem. To make a long story short, I thought it was ‘game over’ for me with music. After a few months of processing this, I decided life must go on and switched over to visual arts as my main creative focus for the foreseeable future. During this period I developed my own style experimenting with painting, digital art and more recently motion and graphics.

My hearing fortunately recovered after a few years and I then found myself with both of these sides of me developing as an artist. I discovered NFTs in Clubhouse in early 2021 and became immediately enthralled. I wanted to learn everything I could and feel we are still just at the very beginning! 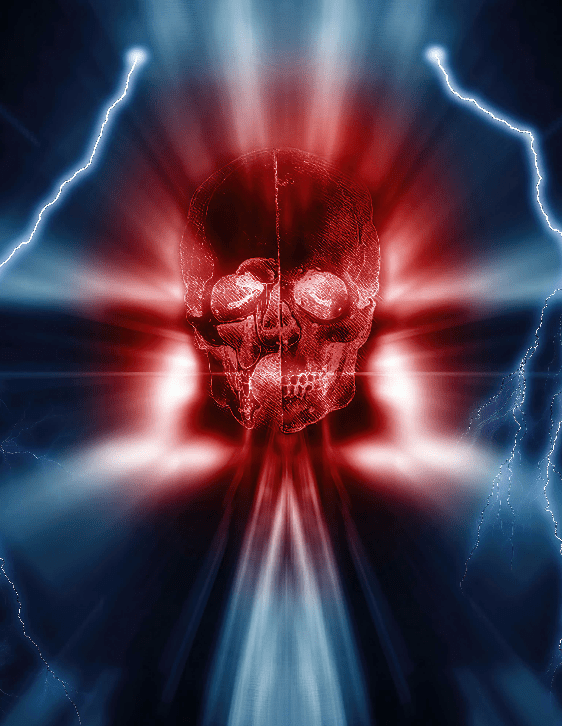 When did you mint your first NFT? What platform did you choose and why?

The first NFT I minted was on OpenSea in April 2021. I think OpenSea is good place to start. It all has been kind of an ongoing experiment for me and the different platforms all seem to have some strengths and weaknesses. The two platforms that I am not on yet and would love to have an opportunity to have my work on are Nifty Gateway and SuperRare.

How did you hear about The Crypt Gallery?

I heard about the Crypt gallery at the Dream Hotel in Los Angeles early this year. I can’t remember how, but most likely it was on twitter or through a friend. I intended to go to a party you had there, but I got the date wrong and went the next day by mistake. Vasia was still there and just happened to be there working in the lobby. I noticed she had stickers on her laptop related to NFTs. I asked if she knew about the Crypt Gallery and that’s how we met!

Why do you think IRL is so important in the space?

In the early days on Clubhouse during covid all we had was a virtual connection. The friendships I have made are some the most satisfying I have ever had in my life and over the last year watching this come alive in real life with conferences and galleries popping up more and more just solidifies that NFTs are here to stay. We are finding each other and as artists and collectors are also able to meet in person, it also strengthens those relationships. Even though everything behind NFTs exists in the digital realm, we are human and nothing can replace the IRL experience.

Can you tell us one thing you cannot live without? (and why)

I would say the one thing that I cannot live without is music, but I somehow did for a few years when my hearing was gone, so I guess I can live without it, but man it is the thing that makes live worth living for me…and art is the same.

Who is your favorite artist(s) (Non NFT)? What about their style resonates with you

Olafur Eliasson. It may seem strange, but his installations have always inspired me. Especially with my music. I think that I am destined to pursue some kind of way of presenting my music and art in a similar fashion IRL. To have resources to pursue this is my dream.

Who is your favorite NFT artist? What makes this artist unique?

I have so many but, I if I had to pick one it would be ThankyouX. I would love to score music to his pieces and think the combination of our work together would really be epic. I also love Parin Heidari’s work with Christian Burns.

I have created a lot of work over the last 10 to 15 years, but I haven’t released much of it. There are a few different reasons for this, but the main one is that especially when it comes to music, I absolutely hated the paradigm that we had found ourselves in. I didn’t even really want to be a part of it, so I essentially just worked on my craft for years for myself. I became obsessed with perfecting every aspect of my work, from the visual side to the music side including the production, engineering, mixing, and mastering. NFTs have renewed my interest in actually putting my work out there. I started last year with my visual artwork and will be moving more into music and the combination of the two later this year.

The Bored Apes. I sat there and looked at them the night they dropped. I didn’t get it…lol. oh well!

If you could travel anywhere in the world where would you go? Why this location?

Greece. My family has a place on the beach in Loutraki and I have not been there in many years. I would love to go next year 🙂

What are your other passions besides art? Why?

hmmm…well I try to take care of myself so working out and eating right major interest for me. I also am fascinated by quantum physics and like to listen to Lex Fridman podcasts when I have time!

Do you make other forms of art?

I make music and visual art… underneath these two headings through are so many sub categories of art. Music production and engineering are also forms of art. I am attracted to highly technical things as well. I think I like engaging both hemispheres of the brain.

Are you self taught or trained?

I am self taught, but I have learned so much from a few amazing mentors along the way with both art and music.

Short answer: by process of elimination and failure. Trying things and deciding what I don’t like or what doesn’t work led me to really finding and sticking with the things that resonate with me.

I think with both music and art, I like rough edges and look for the beauty in accidents and synchronicity.

Both music and my artwork have evolved differently and I think the visual side was a bit behind. I think it is now catching up and they are becoming more defined and unified. I really want my work to be instantly recognizable and at various points over the last few years I think I got off track sometimes with experimenting.

In the near future, I am going to be involving my music more with my own NFTs and as collaborations.

I have a partnership and ongoing collaboration with my friend Chris Cuffaro. We will be dropping many more pieces in the months to come: https://cuffarohits.com/

In addition, I have a collaboration already finished with Freddy Morales: https://www.instagram.com/lufreddy77/

and I am also working on some collaborations with Parin: https://www.instagram.com/parindesigns/

I would love to do some larger gallery showings and parties later this fall possibly with Cuffaro and his photography.

If you could collaborate with one artist who would it be? (and why)

If I had to pick one it would be ThankyouX. I would love to score music to his pieces and think the combination of our work together would really be epic.

I have had a lot of them. Rough Seas make great sailors. Without them I would not be as tough as I am. I think my biggest failure was probably my addiction to drugs many years ago. I experienced a pretty low bottom, but that experience has given me a unique ability and perspective to help others. I also learned that sometimes you just have to surrender and through that there is a power that is greater than myself.

I have been creating in one form or another my whole life and hot so many roadblocks. I’ve never been sure where the drive has come from but it has always been there regardless of outward influence. I have gone through many ups and downs in my life and money has never been the driving factor. I view failure as an extremely important part of creating art or starting any kind of business.

What is your biggest piece sold

Strangely it was an 0N1 Force derivative.

How much did it sell for

That pieces sold for 3 ETH in August of last year. My second biggest piece was Mohawk Red. I listed it on OpenSea as an edition of 10. I sold 8 of them at .6 ETH.

Do you have any upcoming drops?

Yes, this week and I am so excited and grateful to be able to show my new work in the Crypt Gallery here in LA!

What is Peyote Ugly? A Nifty Gateway Drop

King of Midtown presents The Recovery Collection Launching on NINFA.io