Hot off the incredibly successful back to the future NFT launch, VeVe is continuing their parabolic momentum with this incredible tweet:

After DC comics started making waves and ruffling feathers in early 2021, first with an internal C&D to their contractor artists notifying them that they can no longer use DC Intellectual Property in their NFTs.  This was quickly followed by the Batman collection launch on VeVe, other massive classic properties have quickly entered the space via VeVe including My Little Pony, Ghostbusters, Ultraman,  Back to the Future, and now the announcement of Jurassic Park. 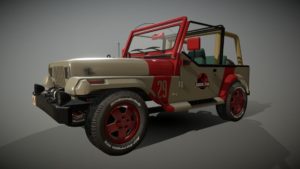 It will be interesting to see which items and characters are minted first, but if we were guessing people, based on the tweet we suspect that the first NFTs will be the following:

VeVe touts that they are greater than 99% more energy efficient than ETH, but like their NBA topshot counterparts have massive scale challenges when launching their NFTs.  The Back to the Future Drop was burdened and bogged down for hours before the store finally allowed collectors in to get their DeLorean’s. On the VeVe Medium page, they state the following.

Being sustainable has always been a strong priority for VeVe and ECOMI since our founding. Our carbon neutrality pledge is a step toward making NFT digital collectibles and the digital AR metaverse part of a green, environmentally friendly future.

They also will grant 1 Billion OMI to help offset the cost of designing, producing and minting NFTs to help the environment.

If you were getting excited about Ready Player One becoming a reality, we’re well on our way. The Delorean NFT Drop from Back to the future is interactive with collectors of uncommon and rare NFTs able to place the object via Augment Reality and pseudo interact with it by opening the doors and peeking inside. The feature is cool and as they innovate the platform will continue to blend reality with virtual spaces.

You can learn more about VeVe and join the community to get early information about early drops via their discord.