Update: ApeCoin has launched. All the details are available here

The rumors appear to be gaining steam and looking more and more real. Yuga Labs, the team behind Bored Ape Yacht Club (BAYC). The team is planning to raise nearly $500m in additional revenue by selling virtual land in the metaverse.  This aligns with their KYC announcement earlier this month and the aligned vision with Animoca Brands.

Update: an unconfirmed slide deck appears to outlay the entire plan for 2022 including

Other Revenue Drivers throughout the year: 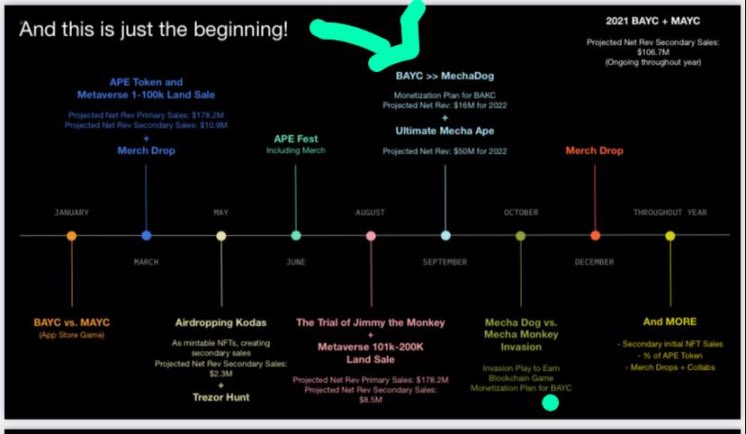 The Block received a deck that appears to show that Yuga labs brought in nearly $130m in revenue during 2021 and is being circulated by investors to gain additional funding. This information affirms the rumors around their goal of a $5billion valuation on the table.

In addition to Land sales, the team will have an app store that will allow users to sell and customize their NFTs in the new virtual worlds. The currency of this metaverse will be APECoin.

If the information is correct the details of the land sale include:

To that end, Yuga is planning to build a gaming-focused metaverse named MetaRPG that will be compatible with a host of NFTs.

There will be a system — described as an “in-game app store” — that will allow players to create characters using NFTs they own or from scratch, outfit them (again with NFTs), and use them in games, according to the deck.

Another crucial component of the proposed world is currency, which Yuga will provide in the form of a much-rumoured token named APECoin.

The token will be used to make purchases in Yuga’s planned app store, and the company said in its deck that it will also encourage “trading and bartering.” – The Block

The tape leaked
-unconfirmed but this looks accurate pic.twitter.com/WQdC8hHsy5

What is the Metaverse?

The Metaverse is a collective virtual shared space, created by the convergence of virtually enhanced physical reality and physically persistent virtual space, including the sum of all virtual worlds, augmented reality and a mixed reality world.

The term was coined in Neal Stephenson’s 1992 science fiction novel “Snow Crash”, which presents a vision of cyberspace as an expansive multimedia “metaverse” that encompasses all computer networks.

In his novel, Stephenson imagines the metaverse as a three-dimensional space where people can interact with each other through avatars, objects and environments in order to share information about themselves or just have fun.

The KYC process is one of the most important steps in any financial transaction. It is a key part of the Know Your Customer (KYC) regulation that banks and other financial institutions are required to follow in order to protect their customers and their funds.

KYC regulations were first introduced in the aftermath of the 9/11 terrorist attacks, as a way to prevent money laundering by terrorists. The regulations were designed to make it difficult for criminals to use false identities or hold secret offshore accounts.

In recent years, KYC has become an integral part of banking, trading and investing across all industries and sectors. Today, KYC compliance is more important than ever before, as it can help mitigate risks associated with fraudulent transactions and money laundering schemes that are often perpetrated by cyber criminals