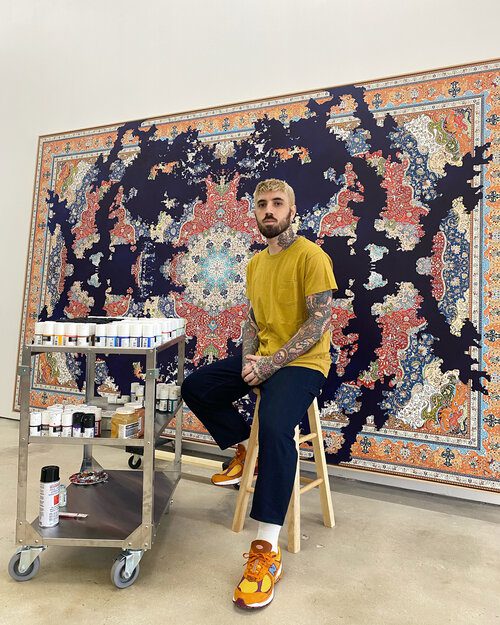 Rarity – The collection includes built in trackable traits including, Sample Size, Sample X, Sample Y, and Segments. 75 of the pieces will include an additional “Printable” trait, which allows the collector who mints to claim a signed print of this artwork. The “Curated” trait belongs to less than 50 of the artworks and signifies that these outputs were hand generated by the artist. The 11 full seed images are also randomly included within the 1111 artworks.

Keep an eye on this site for an update post drop with the full 1-1111 rarity list although we want to emphasize that this collection was carefully designed with the full intentions of making each piece equally strong despite its rarity ranking.

Jason Seife’s work references old Persian carpets, an art form that in modern times is often taken for granted. Carpets were a large part of his childhood growing up with immigrant parents of Middle Eastern descent. Jason recreates these old weavings by tediously painting them on canvas in colors and mediums that were not normally used in their origin. Jason presents the pieces in a new and exciting way. The creation of these works is both a therapeutic and a spiritual process, being able to channel his obsession with detail into the intricate geometry and compositions of the carpets allows Jason to find himself working hours on end without lifting his brush