Galaktic Gang NFT Project Bringing Balance Back to the Universe 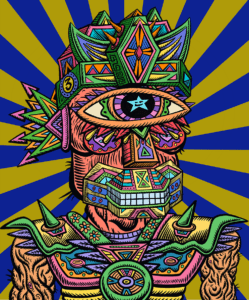 Welcome to the “Eternal Now” on the 5th dimension! In this mystical realm an army of alien spirits are joining forces to combat a vibrational war. The goal of “Galaktic Gang” is to bring balance back to the Universe, one planet at a time! Total Members: 5555

As the Darkness on Planet Earth has gotten way out of control, the “Galaktic Gang” has volunteered to serve as interdimensional guides in service to human individuals. With the subtle help of these 5555 trippy avatars, earthlings have a better chance of reigniting Love and Light as the main energy of our planet!

Each newly activated member will be given different attributes none like each other, using a in house made generative randomizer. So these beings are created in the void of nothingness and endless probability! Each gang member will gain exclusive rights to this fun community and will help bring peace back to our collective reality by believing it is possible!

Chris was recently featured in Forbes discussing this project

“Usually, I don’t like it when somebody buys a piece of my art and then sells it to somebody else, as if it’s some kind of commodity. I like it when people buy my art because they enjoy it and they want to put it on their wall,” he says.

“But with NFTs, because they are more ephemeral and less physical, it makes it easier to let go. Plus, the artist is in the code, and you make a residual percentage when it gets resold.”

Chris Dyer is a Peruvian Canadian visual artist cruising the world spreading some good vibes for the people. He started out doing skateboard art and has done over 100 different graphics for some of the biggest brands in that industry. He then moved into creating spiritual canvas paintings and has exhibited at galleries all over the planet.

His clothing brand “Positive Creations” has produced many beautiful products since it’s inception in 2004. He’s taught workshops all around the globe including shamanic medicine retreats in the jungle of Peru. His art has been included in several magazines including Thrasher, High Times and Juxtapoz, as well as been published in many books, a few of his own. Other than this he also enjoys creating video offerings like his Travel show and Podcast series on Youtube. NFTs is his newest frontier to conquer, so he want to give it his all with nothing but the best art quality and community vibes!

Baka Arts is one of the community leaders in the NFT world.  Having seen success across a myriad of marketplaces including Foundation, Makersplace, and SuperRare, BakaArts is definitely one of our favorites.

I am Darius Puia alias BakaArts, a 30yo Digital Art Designer based in Germany. I have been doing Surreal, Cyberpunk and Sci-Fi art for over 15 years and I design and have a keen eye for modern & colorful types of artwork but I also like to test newer themes. Lately I have also been trying darker and grittier themes. I love taking on new design challenges and making ideas come to life.