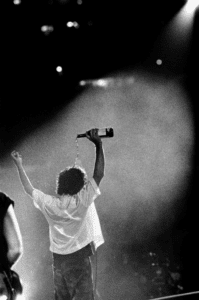 The ‘insouciants’ – those free from caring – are often the knuckleheads and goofballs who can be smart, funny and driven, and therefore the ones who change shit up exactly because they don’t give a shit. Like the people in the photos here. They remade music as we know it. I think the sardonic and flippant side of grunge is often overlooked in the mythologies – after all ‘grunge’ was even coined by that master of dry wit and double entendres, Mark Arm, singer of Green River and Mudhoney fame. Self deprecation was constantly invoked, just as long as it was in the service  of “World Domination,” as Sub Pop put on an early shirt. Grunge was a complex, messy story of contradictions and busted cliches – no one size fits all.

For this first drop in the Charles Peterson Grunge Years NFT collection, I wanted to focus the theme on the lighter side of grunge mythology. Unguarded moments often show us at our humanistic best, and I think that’s what comes through here – the wit, warmth and unbridled youth of these wonderful musicians.

Phosphene came about after a conversation with my co-founder, Kirsten Anderson who is a long time Seattle art gallery owner/operator (roqlarue.com) and I discussed the role of art galleries in the NFT space. We netted out that curation is still valued for both artists and collectors, and gallerists can offer a perspective that could be useful to collectors looking to build a long-term collection. A number of Kirsten’s artists friends were reaching out to her to see if she could help them make the transition to NFTs. This required technology and onboarding support which they don’t have readily available. I also noticed that the NFT community wanted to support climate and sustainability projects to combat the emissions created from blockchains and NFTs but there wasn’t an easy way to do it. That became the genesis of Phosphene.

As for this collection, Kirsten knew Charles and approached him about doing a NFT release of his amazing portfolio.

Charles Peterson, born 1964 in Longview, Washington, is a rock photographer whose work not only captured a moment in history, but defined its look in our collective consciousness.

In the late ‘80s and early ‘90s, a small yet vital music scene was brewing in the Pacific Northwest. A new sound, created by combining garage rock fuzz and metal riffs with scroungy punk nihilism, started to coalesce.  This musical genre dubbed ‘grunge’, originally created by outsiders for outsiders, took off like a rocket and changed the musical landscape forever.

The architects of this new sound were captured from their humble beginnings to meteoric success primarily by one main photographer: Charles Peterson. Peterson’s dynamic, blurry, seemingly snapped off-the-cuff black and white photos perfectly captured the beer-soaked dynamism and raucous energy of the time. Peterson became THE guy that you wanted to photograph your band. He became Sub Pop’s unofficial house photographer and his relationships with the bands Nirvana, Soundgarden, Pearl Jam, Mudhoney and more pushed Peterson’s work to global prominence.

His ability to capture not only intimate casually-cool portraits, but also the vital dynamics of the artist/audience exchange, let us relive these incredible moments of musical history.

It has a strong foundation of history, culture and scarcity. I haven’t seen any projects covering the grunge era. Especially with this level of pedigree. Also, all the images used for the NFT drop have never been published. It’s like unveiling a lost relic in some sense.

How Big is the team and what are their roles? What is the price?

On the Phosphene side, we have Kirsten and me along with some contractors to help with tech and support. Kirsten handles artist and community relations along with business operations, and I manage the tech aspects. Charles is an independent artist.

We are pricing this so that new collectors can start their collection with a super high quality and rare piece.

We did a small whitelist who were early supporters and expressed strong interest in this drop. Otherwise, we are listing all the pieces on OpenSea and Foundation on 9/1 around 12:00 pm PST (depending on gas).