Disclaimer: Most of collectors staking their LOOKS received the LOOKS for free. If you’re staking and being rewarded that is awesome. We WANT this platform to be successful, we just have to raise redflags when we see them.

Let’s start off by saying that competition is good. A decentralized marketplace that rewards buyers and sellers if the ultimate Defi NFT dream.  We want LooksRare to be successful. That being said, the first day of trading on the platform drew a lot of controversy.  The way a lot of the trading is setup, whales were incentivized to “wash trade” to create volume allowing higher LOOKS distributions.

Wash trading is a process whereby a trader buys and sells a security for the express purpose of feeding misleading information to the market. In some situations, wash trades are executed by a trader and a broker who are colluding with each other, and other times wash trades are executed by investors acting as both the buyer and the seller of the security… – Investopedia

NFT Collector and influencer RealDonald went into detail on the data on twitter.

LOOKS is currently sitting at over $4.00 which is good.  Famous Influencer and NFT Collector dingaling also went into detail on twitter about the benefits of the wash trading.  Essentially implying that if they can maintain momentum long enough, the market will become self sufficient. If collectors are incentivized to create volume, eventually the marketplace will be able to stand on its own.

1/ I see a lot of people talking about the wash trading on @LooksRareNFT.

So is it actually happening? Yes

Is it by design? Probably

One of the complaints about issues with Wash Trading is that it blurs and muddies the data. Many fans of LooksRare were touting the day one success of the platform exceeding OpenSea but with manipulation it’s hard to truly measure the momentum. For Example, Let’s look at Meebits. The 90 Day Volume for Meebits on OpenSea was 8.5k ETH. The 24 Hour Volume for Meebits was 16.6k.  So because a new platform is launched the popularity of this NFT was 2x the 90 volume on OpenSea?  Additionally, in a true free market if there was this much demand vs. supply constraints, the price would have likely gone up, but the ETH price of meebits remained flat.

A record Day for NFTs? 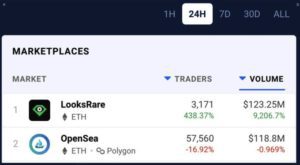 The best thing LooksRare can do is be as open and transparent as possible. Market competition is good. Long term rewarding buyers and sellers on their platform is a phenomenal idea.  Hopefully the market stabilizes and achieves long term momentum to become a true alternative to OpenSea.  Many users were touting 24 hour volume of LooksRare vs. Opensea.  Simple math shows that there is something strange going on. With the average LooksRare user spending nearly $40k on day one.

Other considerations include the fact that OpenSea has lost some momentum over the last 24 hours.  This should be partially attributed to LooksRare, but it’s also attributed to the Ethereum network and swaps being done actively between all of the tokens, especially Looks driving the average GWEI price for the day above 175.

LooksRare is Prepared to do their best

On their website they have acknowledged attempts to stop this type of behavior and long term the incentives for wash trading will drop.

“Each trade on LooksRare (except for private sales) incurs a platform fee of 2%, and typically a royalty fee of between 5%-10%. The total LOOKS rewards for trading each day are also fixed, and distributed based on traders’ contribution to total trading volume, meaning that there’s no guarantee of the amount of rewards that a wash trader could earn in a day,”

Coinbase Partners with Mastercard to simplify NFTs for their upcoming platform

Looks Rare a new NFT Marketplace (With a Token Airdrop)

Robbie Tilton is a 3d designer and founder of Wonder Assembly “A creative studio building the future of digital toys. On a mission to make computers more playful and less mundane”.  Before breaking into the NFT art scene, Robbie held design jobs at both Apple and Google.  Based out of Los Angeles, Robbie takes a creative toy like approach to his NFT drops. His latest NFT release on NFTgateway is going to be a massive set of collectable cards.  His website describes that much of his work is, “is inspired by his childhood obsessions including X-Men, Pokemon, and The Legend of Zelda.”