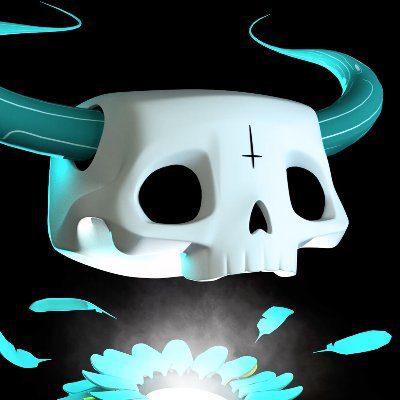 I’m a digital illustrator and animator from the UK. I create macabre artwork mixed with  melancholic, surrealist imagery.

I’ve been creating artwork in my spare time for over a decade, working in the evenings and weekends. I was initially trying to create a dark children’s book, but I could never finish the  story, so I decided to focus on the art and characters instead.

This turned into a series of illustrations that I started to sell in local galleries and exhibitions as limited edition prints. I always had ambitions of selling animated illustrations so when I  heard about NFT’s I jumped down that rabbit hole.

The past year in NFT’s has been incredible, from my first sales on rarible to a huge drop  headlined by XCOPY and then seeing my artwork exhibited in a New York nightclub at  Dreamverse! NFT’s have changed my life and my head is still spinning. I’m so excited  about the future of this space and have some huge things planned.

Tell us about the Nifty Gateway Drop coming soon!

I will be dropping my genesis collection on Nifty Gateway next week! The collection is called Lost Souls and will be distributed in a blind pack raffle.

There will be 125 packs and each pack contains 1 Lost Soul, which could be  a limited edition or rare 1/1 original NFT.

The Lost Souls exist between two worlds, with their own unique connections to a different  realm. There are 6 souls to collect, from angelic ghosts to demonic spirits.

The drop will take place on the 9th March.

Where are you from?

What is your favorite thing to do on a weekend?

I like to spend my weekends creating NFT’s and spending time with my family. I have a 6  year old daughter who loves drawing unicorns and skeletons, so it’s time to start working  on her first drop right? 🙂

One thing you cannot live without?

Who are your favorite artists (Non NFT)?

I think all of my favourite artists have started to make NFT’s now.

It’s a struggle to pick one, there are so many that I love and collect. Locally it’s Metageist,  I’ve been following him for years before NFT’s and he’s also an amazingly supportive  friend in this space. I also love Alex Pardee who was a huge influence on me when I was  younger and the main reason why I started painting. I remember picking up an album by  The Used when I was at Uni and falling in love with the artwork Alex created. After that I  knew I wanted to be a full time artist and I’ve been working towards that ever since.

I was introduced to NFT’s during a discord chat with Metageist. He explained what NFT’s

were to a group of us and it blew my mind. The idea that you could sell any type of digital  file to people all around the world really excited me, as I could finally experiment with  animated illustrations.

It made it possible to be a full time artist and the idea of getting royalties from secondary  sales was a game changer! I was so annoyed that I hadn’t started sooner, so the next day  I set up my wallet and started collecting, learning, then minting a week later.

I also feel in love with the community, it was great to meet new likeminded people with  similar stories and experiences. They are so supportive and inspire me everyday to try  new things and create more art.

Gazers by Matt Kane – I had the chance to buy one from the secondary market for .4, but I  was ill and went to sleep instead. I literally slept on that one.

New York. I was so happy that I made it to NFT.NYC last year, I had the time of my life  and will never forget the NFT takeover in Times Square. It was extra special because I  didn’t even think I would make it to NYC. There was a travel ban from the UK at the time,  so I had to go via a 2 week stopover in Canada! It was a mission, but 100% worth it!

What is your biggest piece sold?

Little Monster 3 – sold for 2.2222ETH (all the 2’s) after an epic bidding war between Peter Bock and Metageist!

I will be dropping my genesis collection on Nifty Gateway next week! The collection is called Lost Souls and will be distributed in a blind pack raffle.

There will be 125 packs and each pack contains 1 Lost Soul, which could be  a limited edition or rare 1/1 original NFT.

The Lost Souls exist between two worlds, with their own unique connections to a different  realm. There are 6 souls to collect, from angelic ghosts to demonic spirits.

The drop will take place on the 9th March.

Where can Collectors Learn More?