Heroes are a collection of 5,555 generative ERC-721 NFTs that act as an access-pass, and playable in-game avatars within the Hero Galaxy. Heroes accrue value and rewards through gameplay within the Hero Galaxy’s various “battle-to-earn” games. All except 10 Heroes are composed of randomly generated attributes of variable rarity, and have 5 slots with which to bear various types of weaponry, armor, outfits, and accessories, called Artifacts – won through their glory on the gamefield.

Crying at the current state of reskinned defi play-to-earn gaming, + watching my friends build the NFT Worlds project gave me line of sight into this unique opportunity to release the first actually fun play-to-earn game on their platform. 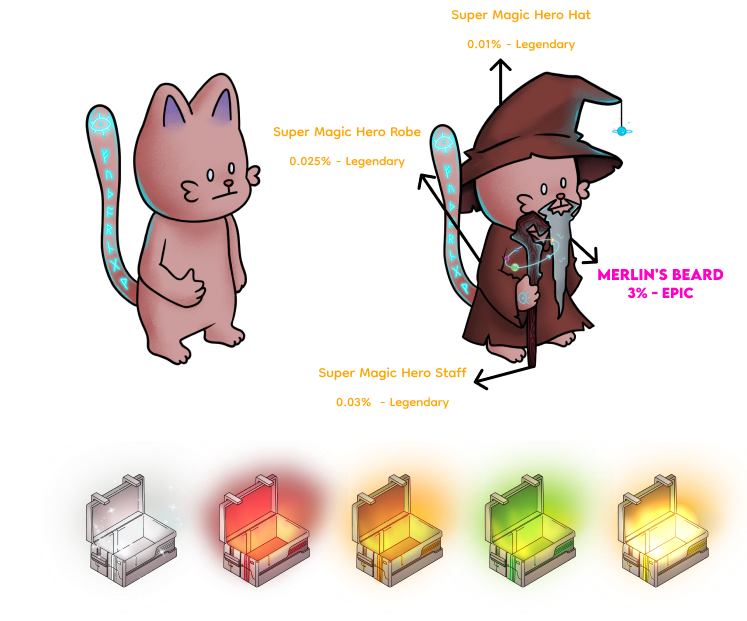 NFT Holders can increase the value of their NFT by equipping Artifacts to it which are earned in game, we figured out how to do staking without creating our own shitcoin, we will be the first game with community-led development via our DAO. https://herogalaxy.io/whitepaper

Where Can Collectors Learn More?

Heroes who play are able to claim WRLD Token (the native token of the NFT Worlds metaverse) and Artifacts, which are standalone NFTs that can be equipped by Heroes to increase their rarity, on a daily basis. The drop chance for Artifacts, and the rarity of dropped Artifacts is dependent on players’ in-game performance.

Heroes who don’t have time to play may stake their Heroes and earn WRLD Token passively. Players who wish to battle and earn within Hero Galaxy without owning a Hero may purchase temporary Galaxy Passes, allowing them to leverage staked Heroes’ access to enter. 80% of Galaxy Pass purchase fees, and 50% of the rewards earned by Galaxy Pass players will be distributed as rewards to staked Heroes.

Hero Galaxy Battle Planets will also host multiple live, timebound, in-game competitions, whose winners will receive grand prizes (riches and glory). Heroes with the best performance will be immortalized both on leaderboards, and in our website’s Hall of Heroes (coming soon!)

People begin to talk of Hero Galaxy. Whispers are heard in Discords across the world(s), desperate DMs from randoms are sent to get a Whitelist chance. “Pls bro” they cry.

Chapter 2: A most glorious mint!

All Heroes shall be minted on the day following Valentine’s Day. All will pray that they are among those most fortunate.

Chapter 3: All is revealed

One week following our newly minted holy day, all Heroes shall be revealed. All are lucky, for gold and glory are in their future. The luckiest will rejoice.

Less than a month after, Artifacts are revealed and the gates to the Colosseum open. Heroes descend from across the galaxy to compete, win Artifacts, glory, and rewards. Blood is spilt. Victors are crowned. Players are made rich beyond their wildest dreams. Some become memes on the Hero Galaxy TikTok.

Chapter 5: Save the cats!

PVE World is discovered and Heroes find friends in danger. They fly to the scene to save as many of their feline brethren as they can. Many perish to creepers, zombies, and traps. Those most valiant are rewarded handsomely.

Seeking to prove their honor on a grander scale, for more glorious spoils of war, Heroes create Battle Royale World. They aim to test themselves amongst one another, to determine who is the most valiant.

The epic ferocity of the Heroes’ clashing resounds across the multimetaverse. Echoes are heard in dark places, where none dare go. Drawn by bloodlust to this source of unimaginable power, a new set of enemies emerge. Prepare for war…

Blake Kathryn is one of the most popular NFT artists in the community. Her unique talents around creating beautiful 3d environments with amazing palettes. She’s an incredible ambassador to the community and regularly engages with her fans while creating work on twitch. Additionally, she’s passionate about social justice and equality topics and regularly highlights artists who haven’t had previous exposure. We expect great things from Blake Kathryn.