Chibi Galaxy is the third generation of Chibi characters. The first generation of Chibis were futuristic but mostly comprised of humans. After the cities fell, humanity had been destroyed and all that remained were the animals. The Ape appeared from the jungle and began rebuilding the fallen cities. They evolved and eventually developed technology to […]

What is the projects launch date?  We launched Sleepwalkers Monday Oct. 25th, 2021, and ran into a few dev issues so we are officially re-minting on Dec. 17th ��  How did you come up with the ideas?  The idea for Sleepwalkers came from the need to somehow get my subconscious inner workings and dreams out […]

We’re excited to announce that Palm Network, a scalable and sustainable NFT ecosystem built on Ethereum, is actively collaborating with Chainlink Labs to improve and simplify how enterprises issue NFTs across blockchains. As a part of this collaboration, Chainlink Labs will be supporting Palm NFT Studio—a collective providing creative and technical services for artists […]

Mubert held its first Generative Music Competition Open Call in August, where artists submitted their sample packs to Mubert AI Studio and competed for a chance to win a full-page color ad layout in The Wire magazine’s November edition. At the same time, the top-five artists were offered the opportunity to release NFTs as a […]

Dyl on NFTs and the Music Industry with Crypto Rich NFT 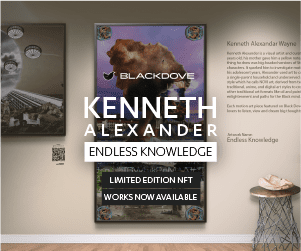 Life in the ethereal enclave was peaceful and prosperous. Rule under the emperor granted eternal life; infinite leisure for music, arts and poetry. For many this was bliss, but when the emperor suddenly died without an heir, everything collapsed. What was once everlasting, has now been condensed to a mere 7,777 hours. Now, gathering means […]

Our Stance on NFTs and Anonymity

Famous Entrepreneur, Public Speaker, and Celebrity Gary Vaynerchuk has announced his first of a few NFT projects launching in 2021.  VeeFriends is described as NFTs that each have a unique story behind the characters with purposeful structure to the VeeFriends tokens.  By purchasing a VeeFriends NFT, the holder gains access to Gary Vee related benefits.  […]

Boss Logic is a giant in the entertainment industry. From humble beginnings creating “fan art,” he is now regularly commissioned by Marvel and DC. He has become so influential that the studios even take note of his “Fan Cast” art. With his “mash up” poster becoming such a success, studios are beating a path to his door with their own requests.

He released his first NFT art January 29th, 2021 featuring art from Star Wars, Marvel, and DC Comics.  His penultimate piece was the somber and visceral Koby Bryant Tribute that sold for $824 and minted over 400 copies.

Best day I have ever had in the longest time, @ivgalleryla@niftygateway and everyone that picked up a piece, you definitely changed my life.