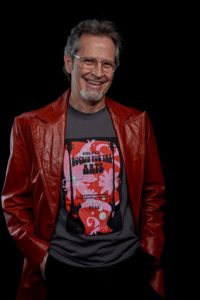 The creative process of Alan Bodner is spontaneous, unpredictable, and often chaotic. Shapes and objects are abstract, disparate—even fractious—but ultimately cohesive. His fine art is featured in galleries and museums throughout the U.S.—including the Paley Center For Media in Beverly Hills—and ranges from pop surrealism prints to multi-tier geometric assemblage.

There are myriad dimensions to Alan Bodner’s geometric assemblage: colorful tiers of asymmetrical wood, board, and vinyl form imaginary environments and landscapes. Often larger than life, they are fine art incarnations of a carnival shooting gallery; a Noah’s Ark of inanimate objects.

Raised in Portland, Oregon, by an extended family of dancers, musicians, toy distributors, and clothing designers, Bodner’s childhood was an overload of creative forces that nurtured a timeless personality: an esoteric mix of Road Runner, Peter Pan, and Ideal’s Mr. Machine. After an adolescence inspired by Erte, Miro, and mid-century pop art, Bodner moved to Los Angeles and developed his talents at Art Center College of Design.

Alan Bodner accepts private and public commissions throughout the world. He resides in Los Angeles, California, near the Walt Disney Animation Studios where he is Art Director for The Mickey Mouse Funhouse on Disney Jr.

What is your favorite thing to do on a weekend? Just recently we moved to Hollywood, something we have thought about for years.  So exploring the westside of Los Angeles has been wonderful.  There is plenty of history to discover here.

One thing you cannot live without?

Aside from family, Coffeeeeeeeeeee!  And I love it with cream. Listen to music daily.

Who is your favorite artist (Non NFT)?

I am very influenced by mid century art and styles from Art Deco, Art Nouveau and abstract expressionists. To name a few Miro’, Klimt, Walt Disney and the late great Maurice Noble.

What made you pursue NFT art? A good friend of mine Susan Prescott introduced me to PRISM.  This is the start of my NFT journey.

If you could travel anywhere in the world, where would you go?

I have many places yet to see.  Italy, Ireland, Hungary and Australia are on my list.

Genies NFT Project nabs Robert Iger (of Disney) to the board

Launch of PRISM NFT Marketplace ushers in a more accessible future for NFT creators and enthusiasts.

Robin is an established artist working with some of the worlds top creative talent.  He’s entered the NFT game with his first drop on Nifty Gateway.

Robin is an illustrative designer and animator based in Belgium. Combining both his immense passion for music and visuals, Robin started Rhymezlikedimez over 6 years ago, which quickly grew into a worldwide brand. Rhymez is best known for working with and providing visuals for international music icons like Anderson.Paak, Playboi Carti, Lil Uzi Vert, Dua Lipa and brands like Nike, Apple and Beats by Dre. He creates a magical universe where the powers of music and illustrations collide. Robin’s aesthetic is a blend of pop culture influences and his perception of the world around him, with a strong feeling of escapism to it. With the main focus on keeping the highest level of quality, he creates a powerful nostalgic aesthetic that resonates with people all over the world.