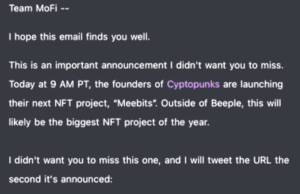 Chissweetart is an incredible surrealist NFT artist from the United states.  Having gained notoriety with visceral and sensual interpretations of pseudo-gothic and post-modern art, her unique style leaves a lasting impression on collectors. What also makes her art unique is that she usually releases 1 of 1 editions which will make her art much more collectable in the future.  You can find her art on Makersplace and Known Origin.